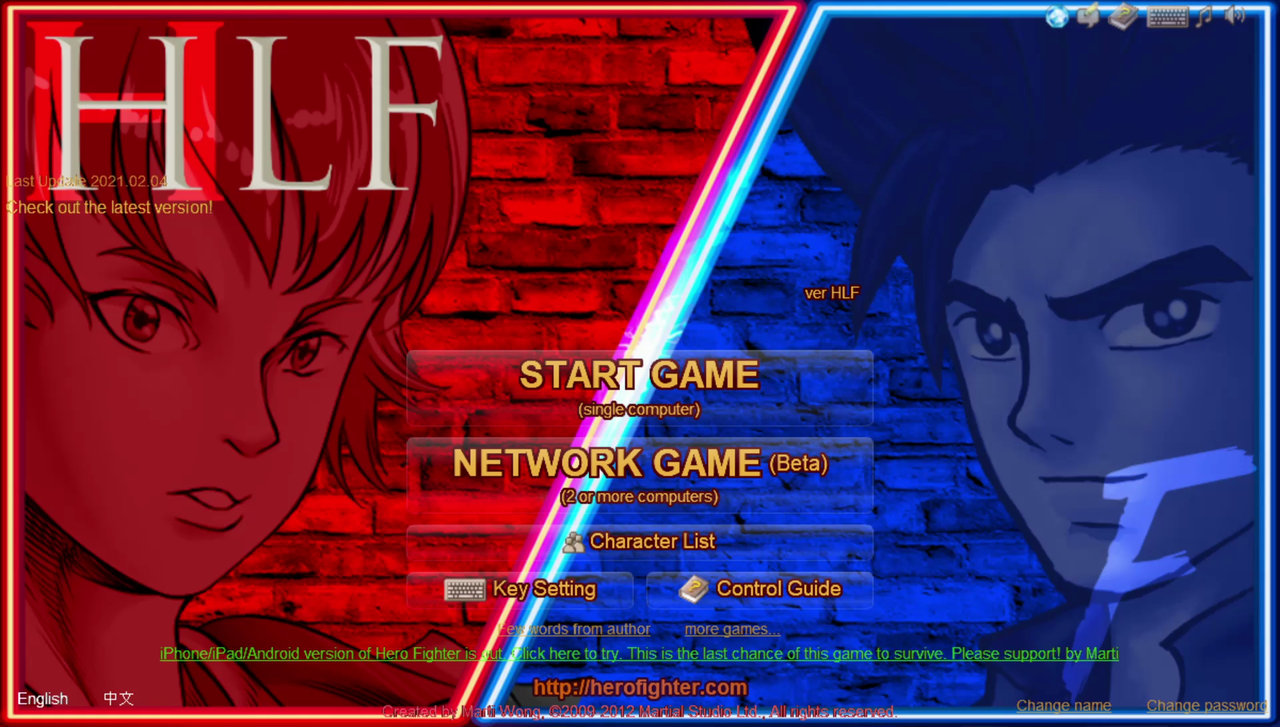 New versions will be released in this MediaFire folder, along with the move set and other notes (download 1 file at a time). You can also access this link from inside the game, as shown in this picture:

- The characters with chinese names are all actually named after men from the Romance of the 3 Kingdoms.
- Greed, Lust, Gluttony, Envy, Wrath and Father are named after characters from Fullmetal Alchemist Brotherhood.

HF Equilibrium v0.7.7 was used as the basis for this mod. Some of @不饿白帝BEBD's character skins are used as well.

by Apocalyman at 06-07-2020, 09:54 PM 1 comments
Hello! first of all I would like to say thank you for doing what you did until now with the server+making the game into an exe and everything else related. I wanted to know if its possible to somehow continue updating this game? this game was my childhood and I even remember when chapters 6 and 7 came out and I was so excited to play them. its sad that this game is dead now. isnt it possible to do something? thank you! (sorry if this has been asked before I tried using the contact form but it says unauthorized or something like that)
Continue reading...
Customize the EXE (aka. Adobe Flash Player Projector)

It is possible to "convert" the SWF to an EXE using HF Workshop, which is actually just using Adobe Flash Player Projector to create a standalone of the SWF. There are many versions of the FP available for download, and you may download them here here.

Note: If you are curious about the algorithm HF Workshop is using, you may check it here.

However, HF Workshop does not customize the FP projector. So here are some instructions on how you can achieve this.

Note: The EXE must not be compressed with UPX for this to work.

For changing the icon, you'll need Resource Editor. Open the  Flash Player projector file (SA.exe), before adding HF swf to it, with resource editor. Expand the "Icon" folder, right click on the first icon, click on "Load resource..." and select the ICO file you want. If you don't have a ICO file but only an image, you can convert the image to ICO using any online tool, like https://icoconvert.com/. The official HF ICO is available here. You may do this for all the icons there, though one should be enough to change the displayed icon of the EXE file. You may then use this modified SA.exe to convert HF swf to exe.

Notes:
- The EXE must not be compressed with UPX for this to work.
- This must be done before combining HF swf with SA.exe.

The menu bar is not very useful. Of all of its options, full screen is probably the only useful one, but this can be achieved with CTRL+F too. Removing this bar is actually easy. With Resource Editor again, open the EXE with it, expand the "Menu" folder and delete all the menu entries.